So we’re right around the actual ten year anniversary of the first REAL OFB show.

Out of Favor Boys played several shows over the summer of 2003. It was really Danny, Tony and me with various players in the rhythm section. We played with some really great players that summer. And I remember being very excited about it at the time. 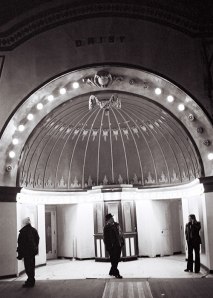 Danny strolling in front of the Old Daisy theatre in Memphis, TN circa 2004

But it wasn’t until the fall that we got serious. We auditioned a couple of drummers, having very little luck. We ran into John Ford one night at Francois’. Danny knew him from his student teaching days at Loy Norrix. He pointed us to Kevin Dorcy for drums.

So we played a gig with Kevin and Greg Orr (yes…that Greg Orr) at Francois’. And it was great, but we all knew that Greg was a temporary solution. (If I recall, he was in seven other bands at that time.)

Kevin introduced us to Timmy Brouhard. And really…the rest of 2003 is really a whirlwind. We played Francois’ and Wonderful’s a bunch. We won the KVBA contest and the right to represent Kalamazoo in Memphis.

The rest, as they say, is history.

After we finished our second studio CD, John moved on to other endeavors and Kevin moved to Chicago. Mike Porter joined the band.

When Mike couldn’t make Thursdays work for hosting the Thursday Blues Jam, we got Tim Miller to help us out.

And over the years, many people have filled in for various Out of Favor Boys for one reason or another. We’ve been very fortunate to have guys like Pete Galanis, John Hill, Alex Mays, Johnie Gayden, Coach Ronnie Parker, Dave Cleveland, Dave Allemang and many more be at least a little bit out of favor with us.

It’s been a great first ten years. I wonder what the next ten have in store. I hope to see you at our anniversary party on Nov. 16.

One thought on “Ten years and counting”